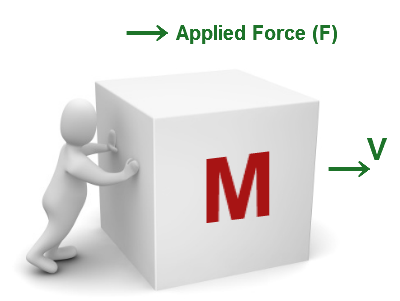 Newton's Second Law of Motion says, "The rate of change of Momentum is directly proportional to the force applied".
This implies that to get to the point where you achieve your goals, you will have to work very hard at the beginning.
Remember Newton's First Law, you are starting from Zero. The force of inertia (the reluctance to leave a state of rest) is your biggest enemy. You will need reserve energy to continue applying force in order to activate big MO.

What is big MO?

Momentum is the Eldorado when motion is the subject. This is the reason why the rich gets richer, and you guessed it, the poor gets poorer. Momentum favors those who have something going on, and of course, it doesn't manufacture anything, it only reallocates resources from those who don't have anything going on to restore balance in the world.

Once upon a time, a man got lost and ended up in a desert. After days of wandering and near exhaustion, he saw a shack (shed) and half-heartedly wobbled towards it, hoping it wasn't another mirage. On getting there, he found a pump. I'm saved!!! He thought. He pumped frantically with renewed vigor that he had no idea where it came from. Zilch. No water. He pumped some more, still nothing. He let out a deep groan and his heart sank.

He looked around and saw a bucket of water. Why didn't I think of that? He kicked himself mentally. Beside the bucket lay a note, it read "If you would like unlimited water supply, you have to pour the contents of this bucket into the pump to prime it. Every last drop must be poured in. Then pump like your life depends on it"

His internal turmoil began, should he drink the bucket of water (security) and go on his way (uncertainty), or should he follow the instructions (insecurity), take a chance and hope it works (uncertainty). After what seemed like an eternity, he made the most unlikely decision.
He poured the entire content of the bucket into the pump and began his fight for survival.

After a few minutes, which could very well pass for a few hours, it started in trickles. The glimmer of hope became a flood of sunlight and he pumped harder. It soon  started gushing and with little efforts, the water kept gushing (that is the Big MO). He drank to his heart's content, filled the bucket and wrote underneath the note "Trust Me, it really works! You have to pour it all in"

Anything worth doing will first get harder before it gets easier. Only those who keep at it get to activate Big MO. That is the leverage employed by the Wealthy and it validates the principle" the rich gets richer, the poor gets poorer"
This is the end of 2015. Unless there is a change in your thinking (still your fundamental human right), your realities by December 31st, 2015 may not be very different from the present.
Yours in Service of Humanity,
@aibitoye (twitter, Instagram)

January 20, 2020
There is no self-made human being anywhere, we are all products of the people in our lives, a reflection of who they are. More often than not, we turn out just like the people closest to us, and we perpetuate or if at all possible, re-invent ourselves to chart a new course. I would like to appreciate some of those people who shared their knowledge with me. Sometime in December of the year 2000, my friend Bukola had told the class to expect someone who would come to teach us some science subjects after closing hours. I couldn't have imagined that the trajectory of my life would be altered forever. He sauntered in about a full-hour behind schedule, said simply "my name is Franklyn Eze, you can call me FRC" and after apologizing asked the about a dozen of us left in the class the question "what makes tomato red?" I was taken aback, not only because it had never crossed my mind, but because I had been asked by someone who was about the same age as me or a co
3 comments
Read more